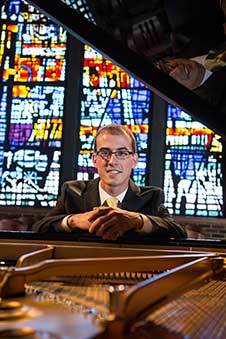 Having a special affinity for collaborating with vocalists in operatic and art song literature, he has worked with pianists Graham Johnson, Warren Jones, Martin Katz, and Ken Noda and vocalists Renée Fleming, Nancy Gustafson, Marilyn Horne, Karita Mattila, and Deborah Voigt. A highlight of Richard’s ever-evolving career was performing at Carnegie Hall as part of the final year of The Song Continues, a series of master classes and performances founded by the legendary Marilyn Horne. A proponent of new music, Richard has worked with noted American composers Mark Adamo, John Corigliano, John Harbison, Jake Heggie, Libby Larsen, Lowell Liebermann, and John Musto. He performed with other members of the UMKC Conservatory as part of the 2014 Beijing Modern Music.

As an educator, Richard has presented performances and master classes at various universities around the country. He also performs and teaches at the Brancaleoni International Music Festival in Piobbico, Italy. He is a frequent adjudicator for competitions and festivals. To celebrate the 250th year of Ludwig van Beethoven, Richard spearheaded the Beethoven 250 Series at Nicholls State University where he was on faculty. This eight-concert series presented the complete cycle of Beethoven sonatas featuring faculty and guest artists from around the world. Richard was awarded the honor of Distinguished Membership as a National Arts Associate of Sigma Alpha Iota for his contribution to the arts. He cherishes his time working with the next generation of musicians.

Richard received his Doctor of Musical Arts degree with internationally-renowned pianist John O’Conor at Shenandoah Conservatory, his Artist Certificate and Master of Music degree under the esteemed tutelage of Robert Weirich at the University of Missouri-Kansas City Conservatory of Music and Dance, and his Bachelor of Music degree under Jerry Wong at Kent State University. Richard currently resides in Marysville, Ohio with his wife and soprano Sarah along with their daughter Lydia.